Sailfish are acrobatic, fast, and beautiful creatures. But, they can also be challenging to catch. They are also pelagic fish, which means they spend most of their time in the open water column and not close to the bottom.

This can make sailfishing a challenge, but that’s what makes it so rewarding when you finally get one on your line! In this article, we’ll go over some sailfishing basics and the tackle and techniques you will need to catch this incredible fish.

Sailfishing is a type of saltwater fishing that targets sailfish, a species of billfish found in tropical and subtropical waters worldwide.

Unlike other types of fishing, sailfishing is more challenging because sailfish are fast and elusive. Not to mention that sailfish also put up a good fight.

Trolling, live bait fishing, and kite fishing are common fishing techniques for sailfish. Although you can use lures, many anglers use live bait such as sardines, pilchards, mackerel, or squid.

What Bait Is Used for Sailfish?

The most common bait used for sailfish is live baitfish. These include small fish like cigar minnows, blue runners, threadfin herring, and ballyhoo or larger fish like mackerel, pilchards, speedos, and bonito. Anglers will often use a kite for sailfishing.

The kite holds the bait in the water and attracts sailfish to the area. You can also use lure baits that imitate the look and movement of baitfish. These are often used when you are using switch baiting to catch sailfish. Some popular lure baits include jigs, plugs, feathers, and streamers.

What Size Hooks for Sailfish?

Of course, the size of the hook also depends on the bait you’re using. If you’re using live bait, you’ll want to use a smaller hook so that the bait stays alive longer. If you are using dead or frozen bait, use a larger hook.

You can find sailfish in tropical and subtropical waters around the world. If you want to increase your chances of reeling in this prized fish, visit the following locations:

If you want to fish for sailfish all year round, visit the sailfish capital of the world – Stuart, Florida.

The sailfish season peaks from mid-November to late February when the water temperatures are between 73-80 degrees Fahrenheit. Sailfish also migrate to these waters in the winter. You can hire a charter with a crew if you don’t have a boat.

The Florida Keys consists of islands off the southern coast of Florida. These islands offer sailfishing spots, including the Atlantic Ocean, the Gulf of Mexico, and Florida Bay.

You can catch sailfish throughout the year, but the prime sailfishing season is from November to January and April to early May. Florida keys have an average of 75-degree water temperature, which sailfish prefer.

Panama is becoming one of the top sailfishing destinations in the world because it sits at the meeting point of two oceans, the Atlantic and the Pacific. These two oceans provide a never-ending supply of sailfish for anglers to fish.

The season for sailfish in Panama runs from December to May, the peak months being August and September.

Costa Rica is one of the top sailfishing destinations in the world, with the sailfishing season running from January to April. There are several sailfishing spots in Costa Rica, including Jaco, Guanacaste, Quepos, and many more.

Costa Rica is a great place to sailfish because:

Sailfish Alley is a stretch of water located off Palm Beach, Florida coast. The alley is between the Fort Pierce and North Miami inlets. With a series of reefs, shipwrecks, and ledges, the Sailfish Alley is the perfect place to fish for sailfish.

Isla Mujeres island, about 8 miles offshore from Cancun, Mexico, in the Caribbean Sea, is another place popular for sailfishing.

The sailfish season in Isla Mujeres runs from November to March, with peak sailfishing action occurring from mid-January to mid-February.

How to Catch a Sailfish?

You can catch sailfish through kite fishing, traditional rod and reel fishing, and trolling.

Kite fishing is an excellent way to sailfish because it’s effective and relatively easy to learn. And, as its name suggests, it involves flying a kite with bait attached to it.

When kite fishing, you need to:

Two types of kites are used for sailfishing: hand-held and boat-towed kites. Kite fishing requires a lot of gear, including a kite, bait, line, hooks, weights, and a reel, and the ideal line should be a 50-80lb test, a 6/0-7/0 circle hook, and an 80lb weight.

You should also use live baitfish such as a bonito, mackerel, or blue runner.

With trolling, you’ll have one or more fishing lines with lures or bait fish drawn through the water. Feathers, spoons, strip baits are some of the commonly used lures for sailfishing, but you can also use live bait, including ballyhoo, pilchards, and blue runner.

The best sailfishing rig you can use is the double-hook rig, which consists of two hooks tied together. It is effective because it allows the bait fish to swim freely and makes it more difficult for the sailfish to shake the hooks.

The idea behind switch baiting is to sail around looking for sailfish activity. This can be anything from sailfish breaching the surface to birds diving into the water. Once you find a sailfish, you drop live bait into the water to attract the fish.

The sailfish will strike the bait, and you will switch the bait for a lure. During switch baiting, you’ll need a mainline that is 15kg mono, 0-110lb wind-on leader, and 8/0-9/0 circle hook.

The agility, beauty, and power of sailfish make them a popular target for many anglers. While they can be challenging to catch, sailfish are well worth the effort. So, why not head to South Florida, and try catching the fastest fish in the world? Once you have caught one or two sailfish, the next step is to join tournaments and put your skills to the test!

Fishing From a Boat: Techniques, Tips, and More! 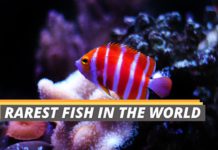 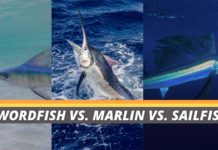 Swordfish vs. Sailfish vs. Marlin: What Is the Difference?