To the untrained eye, swordfish, marlin, and sailfish appear the same. But these magnificent creatures have distinct features that set them apart. In fact, swordfish vs. sailfish vs. marlin are unique in appearance, speed, and even hunting behavior.

What Is a Sailfish?

A sailfish belongs to the billfish family and is one of the fastest fish in the world, clocked at speeds of up to 68 mph. Sailfish can be found in tropical and subtropical waters worldwide and are easily recognized by their distinctive sail-like dorsal fin.

These beautiful creatures can grow up to 10 feet long and weigh up to 200 pounds. Sailfish are known for their impressive speed and agility, making them popular for sport fishing.

These fish are also known for their leaping ability, often out of the water, to escape predators or catch prey. However, they are not the strongest swimmers in the sea; their long fins help them to glide gracefully through the water.

They can change the color of their skin, which they use for camouflage or communicate with other sailfish. There are only two species of sailfish – the Atlantic sailfish and the Indo-Pacific sailfish.

What Is a Marlin?

Marlin is a common name for various large, ray-finned fishes of the family Istiophoridae. Marlins have an elongated body shape, with a long upper jaw that protrudes in front of the lower jaw.

They are known for their long, spear-like bills. Marlin uses their bills to stun or kill their prey.

There are several different species of marlin, including the black marlin, blue marlin, striped marlin, and white marlin.

Marlins are found in warm ocean waters around the world. They migrate long distances every year.

Fun Fact: Members of the billfish family (sailfish, marlin, and swordfish) have advanced swim bladders, so they can reach deeper water depths without using too much energy. So, anglers often utilize deep sea fishing tactics.

Like sailfish, anglers love catching marlins because they also put up a good fight. They are also prized for their meat, which is considered a delicacy in many cultures.

What Is a Swordfish?

A swordfish is from the Xiphiidae family. It has a large, highly migratory, predatory fish characterized by its long, flat bill. It is round-bodied and elongated, with a length reaching up to 10ft and a maximum weight of 400lbs.

The swordfish is named after its sharply pointed, sword-like upper jaw, which is flat and may reach up to 60cm (24 inches). Its unusually shaped bill has led to the swordfish being misidentified as other species in the past, including marlin and sailfish.

The swordfish’s flesh is firm, oily, and considered some of the best-tasting fish. It is often marketed as “steak fish.”

Fun fact: Swordfish are highly migratory, moving towards the poles in the summer and the equator in the winter. They are also transpacific migrants, moving from Japan to Hawaii to California and then back again.

There are three types of swordfish: Atlantic, Pacific, and Mediterranean.

Here is a comparison table of sailfish, marlin, and swordfish, highlighting some of the key differences between these three amazing fish:

Sailfish are easily recognized by their distinctive sail-like dorsal fin. They are long and slim, with a long upper jaw that protrudes in front of the lower jaw. Their body color is blue or grey, with white stripes running along the sides.

At first glance, a marlin looks like a sailfish. However, there’s one key difference. Unlike sailfish, marlins have shorter dorsal fins; they do not have sail-like fins. The color of marlin can vary depending on the species but is typically blue or black.

On the other hand, swordfish are easily recognizable by their long, flat bill. They are dark-colored, with a white underside. Its dorsal fin is located far back on the body, standing vertically when the fish is swimming.

Sailfish hunt in groups, using their sail-like dorsal fin to herd schools of fish into tight groups. They then take turns swimming through the school of fish and snapping them with their long upper jaw.

Marlin typically hunts alone or in pairs. They use their sharp bills to stun or kill their prey. Marlin often herds a school of fish towards the surface, where they swim through the school and snatch their prey.

On the other hand, swordfish are also apex predators but also solitary hunters. They use their long, flat bill to slash at schooling fish, stunning or killing them.

In terms of weight, marlin takes the top spot, as some species can weigh up to 1560 pounds. Swordfish follow second with 100-400 pounds. On the other hand, sailfish takes the last spot as their average weight is between 50 to 220 pounds,

The sailfish are epipelagic fish that usually inhabit humid tropical areas near the water’s surface. You can find sailfish in the Atlantic, Pacific, and Indian Oceans. They also inhabit the Mediterranean Sea.

Marlins are epipelagic fish that inhabit tropical, temperate, and subtropical areas of the seas. They are found in the world’s oceans, except the Arctic and Antarctic.

On the other hand, swordfish are mesopelagic fish that live in tropical and temperate waters. They are found in the Indian Oceans, Atlantic, and Pacific. You can also find them in colder waters near the poles during the summer months.

Fun Fact: It’s not unusual to find swordfish in warmer waters near the equator during winter. This is because they can conserve body heat.

Out of the three, the sailfish takes to the first spot for speed. They are cable of swimming speeds up to 68 miles per hour – they are the fastest fish in the ocean!

Sailfish feed in accordance with their growth. Where sailfish at a young age usually live on reefs, they feed on small schooling fish and zooplankton. As the sailfish grow older, they move out into the open ocean, hunting for larger fish, such as tuna and mackerel.

Marlin usually feasts on small fish, squid, and crustaceans. The black marlin primarily feasts on tuna and dolphin fish. At the same time, the blue marlin goes after squid and cuttlefish. And the white marlin dines on anchovies and sardines.

How about the taste and flavor between swordfish vs. sailfish vs. marlin?

Sailfish flesh is firm and meaty with a mild taste. You can prepare it in various ways, including baking, broiling, grilling, and smoking. Although it may have a strong fishy flavor, some say it tastes like a cross between tuna and mahi-mahi.

The marlin has a milder taste with large flakes. The pinkish-red flesh is firm and oily and is often served as steak. The texture of the marlin is similar to that of swordfish or tuna.

Swordfish flesh is white and firm and does not have a strong fishy flavor. In fact, it is mild with a subtle sweet taste similar to mako shark or salmon. The texture is identical to that of a steak.

Often served as steak, swordfish is a popular choice for grilling or broiling. They are a bit fatty, but not as much as marlin.

Sailfish, marlin, and swordfish are not the same. They are different in appearance and in terms of hunting behavior, speed, hunting behavior, and even taste. Hopefully, our swordfish vs. sailfish vs. marlin article gave you a better understanding of their differences.

Sailfishing 101: Everything You Need to Catch a Sailfish 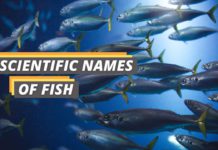 A List of Common and Scientific Names of Fish