Bowfishing is a heart-pumping, one-of-the-kind outdoor adventure that combines the accuracy of archery and technical prowess of hunting with angling.

Sounds like the perfect sport? Hold up. Bowfishing is more than just shooting arrows into the water. You’ll need the right gear and technique and know what fish species you can hunt.

Luckily, our beginner bowfishing guide can help you get started on the right foot.

As its name implies, bowfishing is an outdoor activity that uses a hunting bow and arrow to target fish.

But unlike typical archery or hunting bows, this fastest-growing sport uses a specialized bow and arrow. You’ll also be using a reel and a fishing line.

The premise is simple: When you see a fish lurking in the shallow areas of the river or lake, you carefully move in closer, aim, and shoot. However, you may take a couple of tries and practice because fish moves underwater, and there is water refraction.

This can be disheartening for some beginner archer-anglers, but that’s the appeal of bowfishing – putting your shooting skills to the test.

Expert Insight: You can do bowfishing at any time of the day or night and throughout the year. The sport is most common throughout the United States, but the two most popular destinations are Florida and Mississippi.

What Do I Need to Bowfish?

This outdoor activity requires bowfishing equipment. The good news is that they are not as sophisticated or complex as bowhunting gear. As a matter of fact, you will only need three pieces of equipment to get started.

If you want to start bowfishing immediately, consider getting a bowfishing kit like the Muzzy bowfishing bow. It has everything you need, from the bow, arrows, arrow rest, and even a spinning reel.

Bowfishing wouldn’t be bowfishing without a bow. You have two bowfishing bow options – recurve or compound. 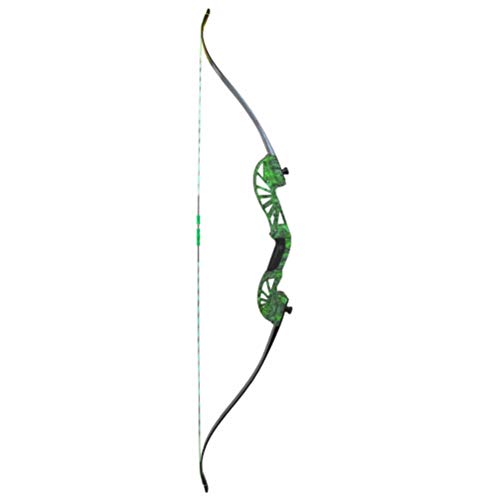 Recurve bows are conventional bows with tips curved to the front for power, hence the name.

Most contemporary recurve bows use lightweight but durable materials, such as laminated carbon fiber and carbon foam in the limbs. However, some recurve bows for bowfishing integrate cellular materials such as bamboo.

This type of bow is lighter and easy to maintain because it has fewer moving parts. However, they need more strength and are slightly less precise than the mechanical compound bows. 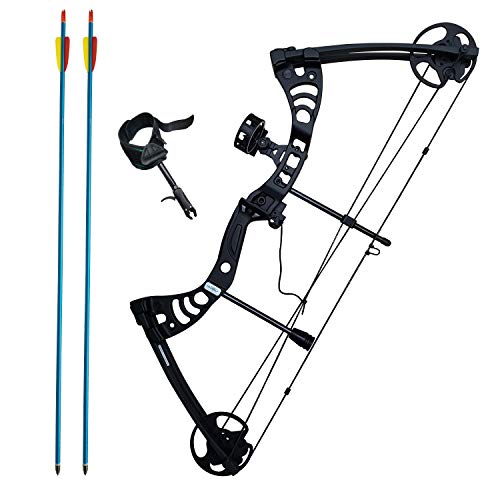 Like recurve bows, compound bowfishing bows use aluminum alloy, carbon fiber, and other composite materials to make them lightweight, tough, and flexible.

The main difference is that this bow uses levers and pulleys to bend the limbs, which are much stiffer than the recurve bows.

In addition, they have more strength and speed than recurve bows but require a little more maintenance. They are also more expensive.

Many archer-anglers opt for a bow with 30-40 pounds of draw weight for bowfishing, but any draw weight will work just fine.

Retrieving your catch can be tricky without a bowfishing reel – unless you prefer to jump in the water. Like a standard reel, this component for bowfishing is responsible for reeling in your catch or the thrown arrow with a fishing line attached.

The types of reels for bowfishing include:

A spinning reel for bowfishing is the same as in standard fishing. It has a drag adjustment system, making retrieving your line easier and faster. It also offers better control.

Unfortunately, if you use a heavier line, it will perform poorly. Plus, they are expensive. 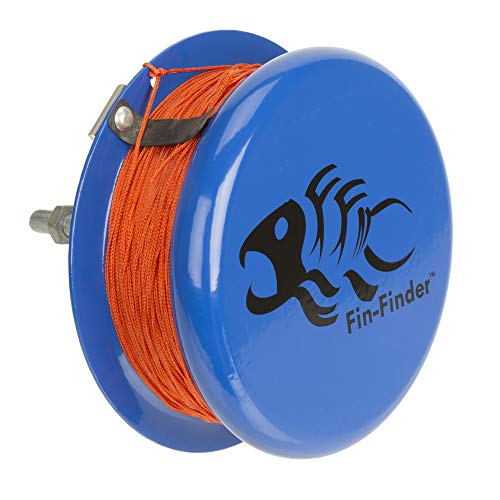 The hand reel is the easiest type of bowfishing reel to use. Once you have made a perfect shot, you only need to grab your line and roll it around the drum as you pull.

A hand reel requires stronger lines and more manual work. Pulling a line with your bare hands can also leave a mark, so ensure you have gloves when using a hand reel. 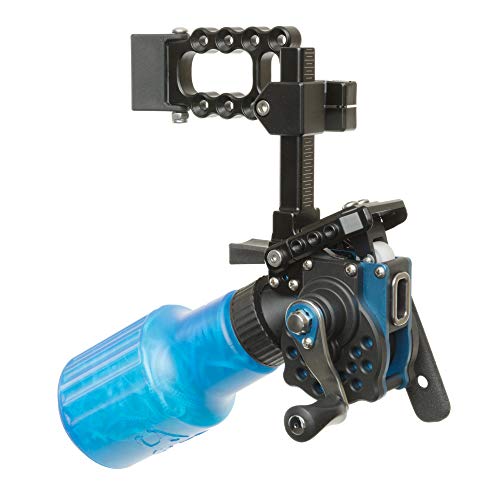 Out of the three types of reels, bottle steel is one of the lowest maintenance options. They are also reliable and generally make shooting easier than hand reels.

Bottle reels typically use heavy-duty lines. While you won’t have an issue pulling your string, accurate longshots could pose a challenge. Retrieval is also slower than a spinning reel. 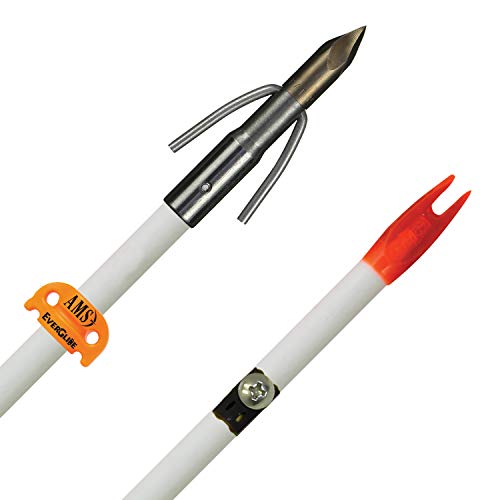 You will find a myriad of bowfishing arrows in the market, but all will have three key parts – the shaft, point, and nock.

Bowfishing arrow shafts are made of fiberglass, carbon, and hybrid.

All these are heavy and strong enough to keep sufficient power underwater to penetrate fish. However, carbon shafts are your best bet if you are after large fish, though they can be quite expensive.

Expert Insight: Do not use regular use archery arrows for bowfishing. The fletching (feathers) can divert the arrow in the wrong direction. 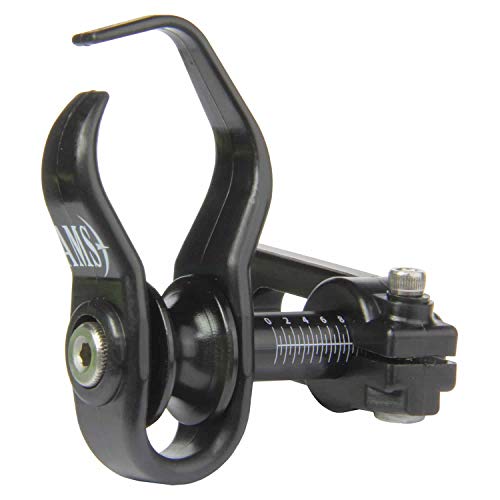 An arrow rest keeps your bowfishing arrow still as you prepare your shot.

Some archer-anglers have their bowfishing setup arrow rest-free, but we suggest getting one because it provides extra stability. Remember, bowfishing arrows are heavier, so they can penetrate the water and maintain the power to kill your target.

Where Do I Bowfish?

The best place for this sport is in clear, shallow waters so you can easily spot and shoot the fish. But you can pretty much bowfish anywhere you like. As long as it is allowed in your state, you can bowfish in rivers, lakes, ponds, streams, and even saltwater bodies.

You can also visit these places for bowfishing.

What Types of Fish Can I Bowfish?

There are lots of non-game fish that you can bowfish. However, most states regulate the type of fish you can hunt legally. Here are some of the common fish that are legal to bow.

How Do You Bowfish?

Bowfishing is easy compared to other fishing methods. With practice and a few tricks, you can become a master marksman within the shortest time possible. The two main factors you will need to consider are stealth and aiming.

Slipping into your target’s quarter unnoticed is critical, especially if you are bowfishing from the wading or shore. Luckily, you can creep up even to the wariest creatures with a few hints.

Knowing how low you should aim will need experience, but there are a few rules to help you get started.

Note: If you use too much force on a fish that is close up, the arrow will exit the fish, making the fish and arrow harder to retrieve.

Do You Need a Bowfishing License?

A valid bowfishing license is a must in most states for all anglers who want to fish using a bow. In Texas public waters, for instance, a license package is required to bow fish in any water body.

However, you don’t need a bowfishing license if you are under 17 years or are a Texas resident born before January 1, 1931.

How Deep Can You Bowfish?

Whatever water body you choose, you will typically bowfish 3 to 4 feet deep for two reasons. First, most fish you can hunt by bowfishing typically hang in shallows. Second, water is heavy, and the less water that your arrow has to traverse, the more force it will have when it hits the target.

Where Do You Aim When Bowfishing?

You should always aim below the fish since the light refraction makes them appear closer to the surface than they are.

The distance you aim for depends on how far you are from the target and how deep the creature is in the water. If your target is one foot in the water, you can aim 4 inches below the fish.

When Is the Best Time to Bowfish?

The best time to bowfish is during the late spring and early summer when most fish spawn in the shallows of rivers and lakes. You will observe lots of action during this period since the weeds haven’t grown enough to provide the fish hiding areas. As for the specific time, it will depend on your target fish’s feeding habits and behavior.

Bowfishing is one of the most exhilarating outdoor activities that you should try! So, get some bowfishing gear, find a friend and see what you can catch this coming weekend.

Catfishing Near Me: Finding Catfish Fishing Spots Near You