Consuming seafood offers many health benefits like better heart health and eyesight. But how about sharks? Better yet, can you eat shark? The short is yes. In fact, fermented shark, called Hákarl, is a national dish of Iceland. However, it is not advisable to have shark meat permanently in your daily diet because of negative health implications.

Can You Eat Shark?

If you reside in the United States, a shark is legal to eat. Unfortunately, most species found commonly off the shores of the states are either endangered or high in mercury. Mako sharks are among the most popular because they taste like swordfish. Thresher and blacktips are two other species commonly hunted for their meat.

Is It Safe to Eat Shark?

Sharks have higher levels of mercury than other fish because they are a predator — they absorb the mercury from the prey they consume. Mercury can become toxic at high levels, leading to many neuro-diseases. The FDA recommends avoiding sharks, mackerels, and marlins due to mercury levels.

While there are no direct correlations between mercury and cancer, it is a neurotoxin. Some common symptoms people experience when they have consumed too much mercury include coordination issues, muscle weakness, impaired speech, and numbness in the extremities.

Urea is the byproduct of consuming protein. If levels rise in the human body, it will shut down kidney function. As for sharks, they need urea to prevent them from drying out in salty water conditions. In a study, the University of British Columbia zoologists found that sharks, specifically dogfish sharks, recycle toxic ammonia in the ocean and convert it to urea.

Presence of Arsenic and Lead

Shark also contains high levels of arsenic and lead. The amount of the heavy toxin will vary based on the prey they consume. While these heavy toxins do not hurt the shark, they are deadly at high levels for humans. Over long-term exposure, people are more susceptible to bladder cancer, cardiovascular diseases, and diabetes.

Why Do People Eat Shark Meat?

For some, they believe sharks carry medicinal benefits. For others, it is a status symbol. Americans often dine on a shark to show a financial class, as it is more expensive than other seafood.

How to Prepare and Eat Shark

Shark has a similar texture to alligator and can be very tasty when prepared properly. The first step is in the selection process. You will want to either catch your own or purchase from a reputable company. Keep in mind that not all sharks are legal to hunt.

Grilling is the most popular way to cook shark meat. However, due to the lean nature of this protein, you will want to make sure you marinate it for a few hours before grilling. Using lemon juice or vinegar in your marinades will help remove the urea odor.

Finally, consider pre-cooking the meat for a few minutes in a milk broth to lock the moisture in during the grilling process. When grilling, place the meat on the hottest part of the grill and sear the outside. After a good sear, move the steak to a cooler portion of the grill and finish the cooking process.

Heat oil in the pan and sear the meat in the hottest portion of the pan. After searing, turn the temperature down and cook each side for five to six minutes, depending on how thick your steak is.

Before serving, allow the meat to rest to lock the moisture inside. Most recipes suggest serving with a glaze with the seasonings, but you can always sprinkle salt and pepper onto the meat before searing.

You can r grill the kabobs in the same manner as any other meat kabob or bake them in the oven. You will still want to marinate the meat before cubing and then prepare a salsa to top before serving.

Which Sharks Are Good to Eat?

Mako is the most popular type of shark. However, thresher, soupfin, leopard, and blue are species with good-tasting meat. Mako is like swordfish, while soupfin is like steak.

Can You Eat All the Parts of a Shark?

It is recommended that you only eat the main body of the shark. You should not eat the kidney or the liver, as both contain dangerously high heavy metal levels.

Is It Legal to Eat Shark in the U.S.?

Yes, it is legal to eat sharks in the United States. However, keep in mind that there are regulations about catching sharks. For instance, the Shark Conversation Act indicates that anglers should bring caught sharks to shore with their fins intact.

Can you eat shark meat? The quick answer is yes. However, is it wise to eat sharks? That answer is more complex. In moderation, it is less likely to cause a long-term problem. However, it should not be the main staple in your diet.

Sailfishing 101: Everything You Need to Catch a Sailfish

Swordfish vs. Sailfish vs. Marlin: What Is the Difference? 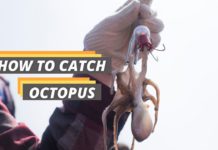 How to Catch Octopus: 6 Ways to Catch an Octopus